Urgench: the Gate to Ancient Sights 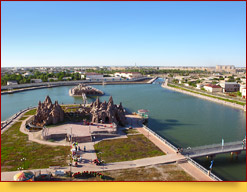 Khorezm, boasting very interesting and rich history, is one of the oldest Central Asian regions. The kingdom of Khorezm shahs was one of the world’s largest in the 11th - 12th centuries. The region is part of Uzbekistan today, and the city of Urgench is its administrative center.

Today’s Urgench is a small city with a population of about 140,000. It is located near the border with Turkmenistan. In the 17th century the residents of Kunya Urgench (located in Turkmenistan now), which, known as Gurganj, was the capital of the kingdom of Khorezm shahs, had to leave it because of deteriorating weather conditions: the Amudarya had changed its course then, and it became too dry and hot there. They moved to a better place and founded Urgench. Khiva - Uzbekistan treasure trove of architectural monuments - is another famous neighboring city of Urgench. The location near this famous outdoor museum had a direct influence on Urgench: it was made an important transport hub of the area, with roads and routes running from it in many directions. It takes only 30 minutes to get from Urgench to Khiva by car; or you can use the unique 35-kilometer-long intercity trolleybus line built in 1997. Have you every traveled to another city on a trolleybus?

Urgench has an international first-class airport named after the city. It is fit for any types of aircraft. Through the city runs the railway line Turkmenabad - Beyneu; and you can travel inside it on shuttle buses, taxi shuttle minibuses and taxies. Besides public transport facilities, Urgench is developing its hotel and restaurant businesses, thanks to which tourists can enjoy their stay in the city.

Among the sights of Urgench stands out the monument to the great mathematician and the founder of Algebra Muhammad ibn Musa al-Khorezmi. Very popular with the tourists is Uzrgench bazaar; it boasts low prices and an abundance of merchandise. Among the natural sights, it is Amudarya - one of the greatest Central Asian rivers - flowing nearby.

Urgench is like a gate leading to fascinating Khiva and Urgench’s predecessor Kunya Urgench, which is an amazing historical site, too.