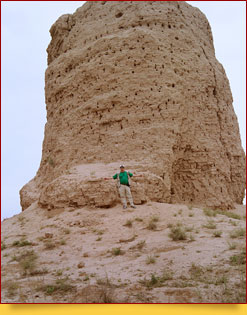 In the beginning of II AD there was governing the most known king of Kushan - Kanishka I. The Kushan kingdom reached its apogee of economic and cultural development under his wise control. Thanks to Kanishka there was made the Fourth Buddhist Cathedral, and the great thinker Nagarjuna asseverated over it the basis of Mahyana (late Buddhism, following Bodhisatva), which blesses not only zealous ascetic monks, but usual people as well, living in accordance with the law and doing good works. And, if the study of Gautama (the great Buddhism teacher) was a prerogative exclusively of philosophers and ascetics, now Buddhism became open and understandable for simple people. Certainly, because of this Buddhism got spread over the immense territory of Asia. And everywhere they started to build roadside temples, open for peasants and for merchants.

Thus, the epoch of Kushan Kingdom (I - III c AD) presented us one more great memorial of cultural heritage - stupa Zurmala, which is on the South - East of site of ancient settlement Old Termez, which is 12km away from modern Termez. This tower represents nowadays construction of 14m height, built from square airbricks (with approximately 33sm side), with typical for Kushan time pattern on it- a line and two pits. The archeologists, having examined the memorial, made up a kind of static summary: 1200000 bricks were used to erect the stupa Zurmala! 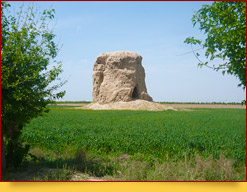 So, stupa Zurmala by the spherical form similar to a funeral barrow, reminds live of fragility of life and symbolizes parinirvana - the death of Buddha and his burial place. In the first years after the death of Buddha stupas were a kind of God's houses where in cubic shaped box they stacked a lock of hair from his head, a rag of his clothes, a piece of his relics. This box was put on the top of stupa, over it there was put the Good Umbrella which in allegoric sense protects from hardship and sufferings.

Stupa Zurmala consisted of squared bottom 22х16 m and, actually, "body" itself - the cylinder 14,5 m. in diameter. The construction had a stairway, leading to the platform of the base for ritual circumvention of believers. Brickwork transition to spherical end is clearly seen as well. Archeologists established that the foot of stupa was covered by marly limestone, and burnt brick was used for an ornament also. Till now there is no exact data whether was stupa Zurmala an independent structure or adjoined any temple complex.