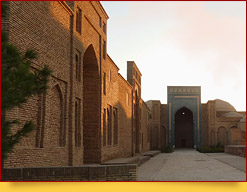 “Sultan” Saodat in translation from Arabic means “dominion of seids”. Seids are considered to be direct descendants of Prophet Muhammad. The progenitor of their dynasty was Khasan-al-Emir, who represented the fifth generation of imam Khusein, the grandson of Muhammad. Sultan Saodat is the name of the family burial vault, located 3km away from Termez, on the shore of Surkhan Darya. The first mausoleum of Sultan Saodat ensemble became, erected in the middle of 30s of XIII c., khalifa’s burial vault. At the same time, possibly a bit later, at same place there was erected a city by the citizens of demolished by Mongols Old Termez. This city in historical sources is called Madinat ar- Rijal (“The city of scholar men”).

Sultan Saodat ensemble extends from the East to the West, and is 70m long. Unlikely half of its buildings remained till nowadays. Original ensemble burial vault consists of two premises (the mausoleum and the mosque), covered with domes, and aivan (arched vestibule), connecting both premises. There are two entrances in the side walls: from the North - into the mausoleum, from the South - into the mosque. The frontispiece strikes by simplicity and grace of decoration, all the more sight astonishing, completed from burnt bricks: “herringbone”, geometry shapes, buds. There are flat niches along the full length of mausoleum walls, decorated with “bows”. The whole space of the mausoleum is occupied by rectangular faceless headstones nowadays. 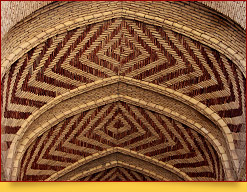 The mosque also became a place of sepulture that is why it is wrongly called mausoleum in scientific literature. The mosque is “nice nelly”. Its walls are finished with only two twin brick rows. And only it’s mikhrab (niche for imam praying) is decorated with “bows”. There were found inscribed Koran rows in the interior of the mosque.

Side walls of the construction are decorated with octagonal majolica tablets with geometrical ornament, and there were gold insertions in the glaze. Arch archivolt was resting on three-quarter columns with quaint capitals, decorated with geometrical and vegetative ornament. The vestibule walls were covered with painting, completed with black and blue paint (the fragments were found during researches). Only a small part of this décor remained up to the middle of XX century, and it is totally lost at present. 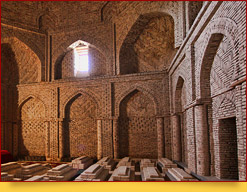 Sultan Saodat was periodically reconstructed. Thus, it happened for the first time in XIV-XV c.- the original elevation of building was renovated, former décor began to correspond to the style of that time, the inscription was inscribed, which is valuable to scientist because it is one of the earliest written records of Termez seids lineage. Next reconstruction was made at the end of XIX c, by sheikh, who was the complex keeper, descendant of seids. It is under reconstruction today, as well.

At the second half of XIV c on the East of the complex two more constructions were built: darvaza-hana (facility near the gates) and hanaka (abode of dervishes). Later, according to number of fireplaces, hanaka premise was used as a kitchen.

In 1978 it was demolished and became a pen for sheep.

Sultan Saodat was the place of active pilgrimage for Muslims till recent times.  From Thursday to Friday they slaughtered sacrificial animals, cooked food, read Koran, walked around the graves, lit candles. And after distinguished demaracation between Uzbekistan and Afghanistan the pilgrimage almost stopped.