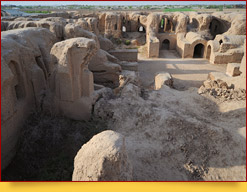 Kirk-Kiz Fortress was built in IX-X c AD. It is located in Termez area, in Namuna village. This building is nothing but residence of samanid emir, who loved to be far from the noise and dust of a big city in Summer time, and with this aim built for himself this construction. The names of architects who created architectural poetry of the fortress just with usual clay are unknown, and time mills “ground” the biggest part of the building. But even today it is possible to see remained fragments of the beautiful paint on the arches.

Poetic name of the fortress “Kirk-Kiz”, which means “Fourty- Virgins” , should had irritated the romantic minds of that time, as it was all about a lady. There were legends created about the fortress, and each had a female.

One of them says that once upon the time there was a local Amazon, and she was beautiful. And the name for her was Gauhar. Thirty nine maidens more lived with her in the fortress, managing with the sword as their ringleader. Total of forty souls - “Kirk-Kiz”. 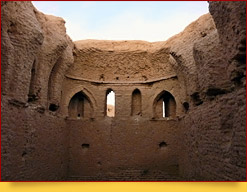 And enemy came close to the walls, and the battle began. Forty days and forty nights continued the siege of the fortress. The equal time beautiful virgins beat back the attack of the enemy. Many enemies lay down, as well as fighting girlfriends of Gauhar. And now she remained with a few ladies, waiting for help.

Fortress is on fire, walls are hanging by single hair, dying people are in agony. Not the simple conditions to survive. But our heroine is desperately strikes the enemy with arrows. But nothing is everlasting and arrows as well. Gauhar came out, deadly wounded, of the fortress in singular. “I’m Gauhar” she said, “my troop died fighting, bring me your leader, I want to fight with him!”. Here the helmet slipped down the bleeding head of its own, and the plaits spilled over her back. “Ooooh!” was amazed exclamation of the warriors. The leader shrilly looked at the virgin, and thought that he would like to have such brave warriors as Gauhar in his squad. And he started to respect her. He jumped down the stallion, ran up to her, kissed her hand, and getting upset of understanding of own injustice, shouted out: “No need for satisfaction, lets go home!”. The troop approved the leader’s actions and they went back where they came from.

Horsemen disappeared beyond the horizon, Gauhar was standing glad, and here ambulance arrived, on time. “At last!”-  exclaimed the lady and fall flat on her back “the city is saved”. 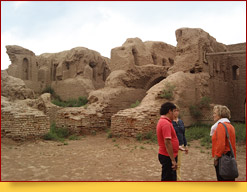 The second legend says that once upon the time there was Padishah ruling Termez. Having forty daughters, and all virgins, he lived a vast life, having no home troubles. And from far away came wise man-Sufi to Termez. Padishah’s mullahs caught from him, he knew the life of Muhammad far and wide and asked them. Mullahs nursed grievance against him, and decided to wash their shame with the blood of wise man. They libeled to Padishah: “What the things this insane told! Even the tongue can’t repeat”. “What’s there again?” lazily asked Padishah, sipping the tea. “He is abusing our religion!” they said. “I order to burn him!” responded Padishah, biting halva.

That is what happened. Sufi was burnt, as required, scattered above Amu Darya, for blessed those who know not! As forty daughters at that time were taking bath in the waters of this river. Thus they all at once got pregnant, having drunk the cocktail of water with ashes. How Padishah was angry! He ordered to build a fortress and with nurturing aims shut up all four tens of his maidens. And they in turn, after required time, bore the same amount of sons. What happened next- there is no mention in the history.

Huge palace with the wide corridors leading to the hall for guests reception; some tens of rooms on the perimeter; the complicated architecture of the walls, arches and domes - all admits us to agree with scientists who assert that Kirk-Kiz fortress is a museum of incredibly rich skills of medieval architecture.