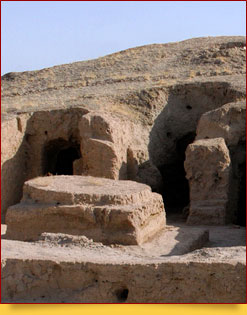 Karatepa complex (“Black hills”) was the Buddhist culture centre in II-IV c AD. Erected on the three sand hills, Karatepa complex is situated on the North-East of the site of ancient settlement of Old Termez and has the square of eight hectares. Earlier the complex was consisting of tens of monasteries and temples in the form of on ground-cave erections. Those where cut out on the hillsides buildings from airbricks and pahsa (packed clay) or dug out in the quaternary sandstone caves.

There is a fragment of Buddha image remained on the wall of one temple, who overcame sensual desires, malevolence, laziness, and other  obstacles in order to feel dhyana (the seventh level of Ashtanga Yoga). The image finished with clue paints and”is breathing” with the atmosphere of secular desires futility.

As in any Buddhist temple, here there are numerous stupas - quaquaversal constructions for the relics’ storage, with no access inward. But thereof the territory of the Central Asia is not rich with stones, they were built of clay. However, scientists found the evidence that there was also a stone sculpture of Buddha on Karatepe.

At the time of Kushan kingdom (I-III c AD) the Buddhist cult centre Karatepa had the name of «Khadeva - ka vikhara», or the Royal monastery. This time marks by itself Buddhism blossoming on the given territory. In the V century the caves of Karatepa were used for sepulture. In IX-XII c hermits-Sufis found there a shelter.

Professor Kato Kjudzo, a Japanese archeologist, together with the director of Institute of archeology of the Republic of Uzbekistan S.Pidaev and the docent of the same institute T.Annaev studying the secrets of Karatepa, enriched modern science with the invaluable data about the history of Buddhism spread and emphasized the role of Termez Buddhist monks in this process. For what was awarded by "Dustlik" order - one of the highest national state awards of the Republic of Uzbekistan.