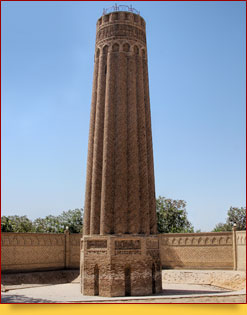 The monument of Islamic architecture of the times of Baktriya kingdom, minaret of Djarkurgan - is 60 km away from Termez in the village of Minor. It is unique historical monument on which there is the name of the craftsman, who created it, - Ali ibn Muhammad from Serahsa. The minaret was erected in 1108-1109 AD and initially represented construction of forty-meter height, the vertical axis deviation of which in course of time was brought to approximately 2 degrees. Scientists assume that the minaret of Djarkurgan was either uncompleted, or destroyed.

This historical monument adjoins a mosque, the ruins of which were found by scientists in 1879. It is supposed that in hard times the top of a minaret and mosque ruins, were disassembled by inhabitants for economic needs. It is considered that the minaret stood separately from a mosque. This is shown by the absence of adjunction signs.

• Was a spatial landmark, thus showing the location of the mosque;

• They called faithful to pray from it;

• They called citizens for urgent meetings in case of emergency situation from it;

• In terms of translation “light emitting” it played a roll of beacon for Muslims, both in direct and indirect meanings. 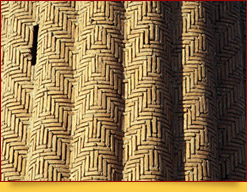 The uniqueness of the minaret of Djarkurgan for the Central Asian architecture is in its partitioning by vertical decorative "herringbone" flutes, as in the tower mausoleums of India and Khurasan. They create a feeling of simplicity and grace and are made of burnt bricks. The foundation of the minaret is laid out from burnt bricks with the lime mortar.

Sixteen semi columns, closely adjoining to each other, are based on an octahedral socle and in the top remained part are "tied" by a belt of epigraphic ornament which shows the name and epithets of emir Sultan Sandjar. Minaret of Djarkurgan was built exactly by the command of this seljukid governor. The entrance, made nowadays on a minaret stairway, is on its South-West part.

Today the height of minaret of Djarkurgan is 21,6 m, diameter - 5,4 m. And, despite destructions, impresses with the harmony and creates the feeling of the finished construction.