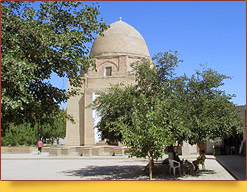 Burhan al-Din Sagarji was a successful propagator of Islam in Eastern Turkestan (today’s Xingjian, China). He spent most part of his life as a pilgrim and died in China where had become a highly influential person at the emperor’s court. According to his will, he was buried in Samarkand he had very much loved. The mausoleum was built by order of Tamerlane who revered the sheikh.

The building has the form of a cube with a dome on it. It has no large main-entrance pishtaq portal typical of Timirud architecture; the entrances on three sides of the mausoleum are of equal size. In contrast to the other medieval Samarkand edifices, the mausoleum is not large: 14 by 12 meters in area and 24 meters in height. The interior is impressive in its austere simplicity. Burhan al-Din Sagarji’s wife and their nine children were also buried in the mausoleum. 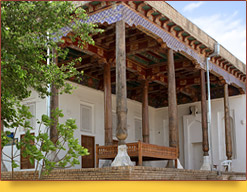 Then the sheikh left for China to propagate Islam. During one of the ceremonies he met Chinese emperor who was very skeptical about Burhan al-Din’s preaching and demanded a miracle of him to prove that Islam was the only true religion to practice. Burhan al-Din’s opponent, the most powerful magician of the empire, soared to the sky to prove his faith. Seeing this, the great Islamic educator appealed to Allah with all his heart and soul, ‘Lord, help me to direct these people to the right way!’ Then, listening to the inner voice, he took off his shoe and threw it into the sky… The shoe became a barely visible dot; it caught the magician and knocked him down. Burhan al-Din was pronounced the winner, and everybody present bowed low and said to him, ‘We shall believe in your God!’

According to another legend, Burhan al-Din kept a copper box with seven beard hairs of Muhammad the Prophet. When the mausoleum was being built, the box was incased somewhere in the bricks of the dome.

They also say that Tamerlane respected the saint so much that he never passed by his mausoleum on horseback. He used to dismount and proceeded past it on foot.

Today the mausoleum is an Islamic pilgrimage place as well as a tourist attraction visited by many people.