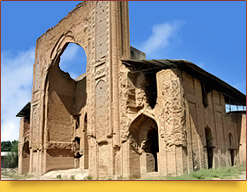 Ishratkhona, built in the second half of the 15th c, is a unique architectural monument southeast of the Registan Square. Initially it was not a mausoleum. There are a lot of legends about the construction of Ishratkhona. Here is one of them.

Once great Tamerlane, riding his faithful horse at leisure around Samarkand suburbs, found himself in a sweet-scented blossoming peach orchard where he saw a girl of unbelievable beauty. He dismounted, knelt before the girl, proposed to her and she accepted his proposal. Tamerlane was so happy that he ordered to build an ishratkhona - ‘a house of joy and entertainment’ - at the site of their meeting.

This beautiful legend continues dramatically. After the building was completed, Tamerlane often held feasts with a lot of guests in it. One of them - with top military commanders, domain rulers and viziers present - took place on the day famous Ulugbek, Tamerlane’s grandson, who was fond of astronomy, had determined as his grandfather’s date of death. As he heard of the feast, Ulugbek immediately vaulted into the saddle of his fast horse and galloped it to Ishratkhona. When he got there, he burst into building on horseback, with his sword unsheathed, and began driving everybody out with shouts. Tamerlane did not get why his grandson behave so impudently, but everybody obeyed and walked out. Much to their surprise an earthquake began just at that moment, and the ceiling over the seats Tamerlane and his suite had just taken collapsed. Tamerlane, enraged at first, changed his temper and thanked his grandson who had in fact saved his life. 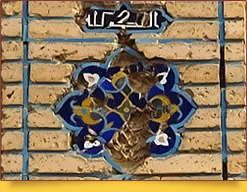 According to the legend, the building was not repaired. Later they used Ishratkhona as a sepulcher for the children and women of Tamerlane’s dynasty. None of the Prophet Muhammad’s descendents was buried there, so this site is not considered sacred by Muslims.

The mausoleum once looked grand and luxurious. Although only part of it survives, its former splendor can be imagined. The central dome of the mausoleum collapsed as a result of the powerful 1897 earthquake. Besides, Samarkand suffered another heavy earthquake in 1903; it destroyed the side three-span galleries running off the large hall and the smaller blue dome on intercrossing arches. However, there are photographs and drawings of the mausoleum left, showing its missing parts.

All the sides of the façade are decorated with fine pictures. The façade itself is made of polished bricks; the elegance the structure boasts is there thanks to the lines and curves of the massive arched and vaulted frame. If examined closely, all the mosaic and brickwork seem to be made by one master craftsman. All the interior walls were beautifully decorated with gilt. It is not even the precision and elegance of the architectural design of this unique monument that amaze; it is rather some of its elements, which are not typical in the area. Among them are high-located windows with panjara latticework (made of gunch stucco or wood) or multicolored glass. 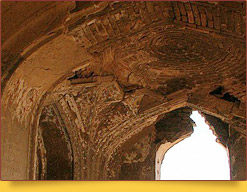 The monument has been many times ransacked and vandalized. Even after Tsarist Russia strengthened its hold on Samarkand - when well-known artists, historians and travelers began visiting the city, confirming Ishratkhona was a unique monument - it was still being looted.
When the 500th birthday of Alisher Navoi was widely celebrated in 1939, a sum of money from the fund of the event was allocated to researching into Ishratkhona mausoleum. The research proved that the mausoleum’s second floor bricks had once been cannibalized to build a takhoratkhona washing house in the mausoleum of Haji Abdi Darun; the floor of that washing house was covered with the marble slabs ripped from Ishratkhona. They also found out the corner room of the mausoleum had been for a long time used for boiling grape juice to make wine. The structure, indeed, had been converted to ‘a house of joy and entertainment’. There are hopes that the monument will be restored in the near future to charm with its original splendor again, and our descendants will have chances to enjoy the fruit of the amazing sense of style and artistic proportion their distant ancestors once had.