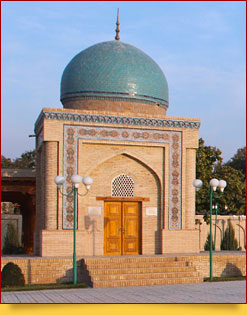 Margilan (Marghilan) is one of the oldest cities of Fergana Valley in Uzbekistan; it keeps in its history, a lot of glorious traditions. Margilan is known worldwide for its beautiful silk and remarkable architectural monuments, which are the main attraction and speaking of landmarks the first place to mention is an architectural complex of Pir Siddiq, built in the mid-18th century. This is one of the few buildings that survived the constant earthquakes that occur in the region.

The miraculous escape
Legend has it that in ancient times, Turks-pagans, attacked the Fergana Valley, and the saint Pir Siddiq hiding from unbelievers hid in a cave. As soon as he entered the cave a flock of pigeons flew in and platted a lot of nests. Passing by the cave Turks thought that in such a place no one could hide and did not inspect it. So, in memory of the miraculous rescue of the saint, around the tomb the whole complex of Pir Siddiq was erected, and the pigeons were especially esteemed in Margilan. People still call it "Kaptarlik" ("Pigeon").

The architecture of Pir Siddiq
The heart of the complex is the mausoleum built over the burial Pir Siddiq in 1742. The mausoleum is a rectangular structure supported by four wooden pillars, which are decorated with beautiful and delicate carvings. Entrance to the tomb is a traditional Islamic architecture portal, flanked on either side by two columns. Interestingly, this structure is not covered by a dome on top. The original dome was, but later it was replaced by a flat surface. Around the mausoleum of Pir Siddiq is a small courtyard, surrounded the fence with portal-domed entrance. There is also an iwan, which hovers above like a symbol of the complex - a dovecote with the sacred birds.

On the eastern side of the complex stands a minaret from which people are called to pray, and a mosque. Integrity and compactness of the composition distinguish this architectural complex.

As a unique and vivid construction, a complex of Pir Siddiq takes a worthy place among the architectural sights of Uzbekistan.