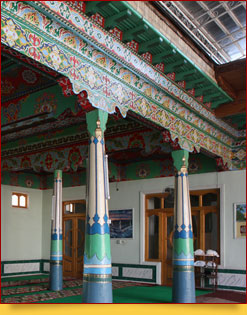 Chakar Mosque
Among the architectural attractions of Margilan (Marghilan) only a few buildings have survived local earthquakes. Among them, a small Chakar Mosque is nestled modestly. It is a remarkable building.

Muslims have a tradition on the site of an old building, that long ago lost its grandeur, erect a new one. Build on the site of the spiritual an administrative or residential construction was considered extremely disrespectful to the traditions. The Chakar Mosque was saved as well: but previously majestic place was rebuilt in a small, cozy mosque, which consisted of a prayer room, iwan and outbuildings scattered across her patio. However, during the Soviet era most of the buildings had been destroyed due to redevelopment of the city. In the end, remained intact only the iwan, also known as a summer mosque.

Secondly, the mosque is notable for its interior. The three sides of the building is closed on by the asymmetrical walls of the chapel building. Ceiling space of the mosque is decorated with exquisite beautiful paintings in the form of floral bouquets on a colored background. And on the ledge of the iwan floral design is applied, submitted by the red flowers on a green shamrock. In one of the beams can be seen the inscription, written in Arabic script, which tells us that the mosque was built in 1329 AH (1911) by Tuhtabek and Mirbobo Hoxha.

Toron-Bazaar Mosque
Another building, the age of which is more than 100 years - is also a mosque called Toron-Bazaar (Thoron-Bazaar). It has been erected in the late 19th century. The mosque is located near the town market, which affected the name of the building. In 1936, the Toron-Bazar Mosque was transformed in the House of farmers. Here farmers and local people that came to the bazaar could relax in the shade of plane trees. The construction has a modest decor but that does not cancel its cultural value and significance of a historical monument.