Shergazi-Khan Madrasah is one of the oldest Khiva madrasahs. It is located in the center of Ichan-Kala, right before the entrance to Pakhlavan Mahmud Masouleum. Owing to the natural subsidence of the earth under the building, its entrance went two meters down over time. The construction of the madrasah was launched in 1718 by 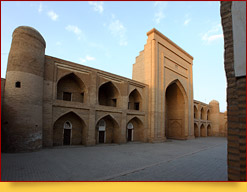 order of Shergazi-Khan by his prisoners of war he had captured during his successful military campaign in Khorasan. Following the victory, the khan got a few new honorifics: God’s Lion and The World’s Sun; and the madrasah was supposed to crown his achievements.

The khan promised to release the captives after they completed the building but obstructed the construction in various ways. In the end the slave builders got enraged and in 1720, when Shergazi-Khan came to inspect the construction site, killed him. His mausoleum was built there as well, to the west of the façade. Shergazi-Khan Madrasah had a popular nickname Maskani Fazilan (‘place of knowledge’) because many well-known poets and scholars from Khiva and neighboring kingdoms studied in it.

The madrasah is a one-storey building with a two-storey portal. The yard inside the building has four ayvan porticoes along its sides. There are 55 hudjra ‘cells’ (for students to live and study in) and a lecture hall.

According to historical documents, the madrasah was repaired a few times. However, it was in very poor condition early in the 20th c. With the USSR to come, the building was thoroughly restored and some of the original splendor of its decoration was brought back. 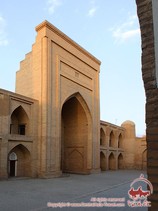