Sayyid Alauddin Mausoleum is one of the oldest Khiva’s architectural monuments in its Ichan-Kala inner town. The mausoleum has been many times reconstructed and modified; scholars can only presume its original appearance and the date of construction. 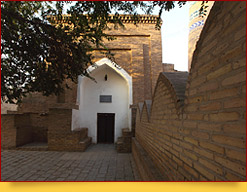 It is only known that the sheikh Sayyid Alauddin himself - a well-known Sufi of Nakhshbandiyya Sufi order - died in 1303, as the inscription on the tomb says. However, the construction of the mausoleum is dated to the times of Amir Kulyal - the second half of the 14th c.

By order of Allakuli-Khan in the first half of the 19th с they attached a square ziarat-khona ‘prayer’s room’ to the western part of the mausoleum, which changed the whole entrance to it. Late in the 19th с the honorable Khiva khan Sayyid Mukhammad was buried in the mausoleum, and a special tombstone was set up for the both graves. The tombstone is a base with two sagana ‘ogival grave-like tops’ on it.

While the domes, walls and trumpet vaults of Sayyid Alauddin Mausoleum are made from adobe bricks and have no decoration, the tombstones make a strong contrast with them: they are covered with splendid colored majolica in the traditional Khorezm style of the 14th c (though this decoration was made in the 1860s). 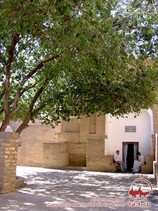 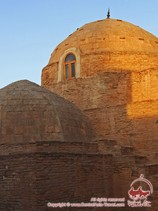