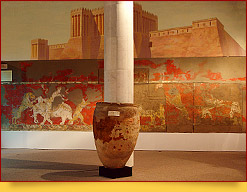 The site of ancient settlement Varakhsha dating from the 4th с BCE - 11th с BC is located at a distance of 40 km from Bukhara to the west. Varakhsha was the residence site of Bukharkhudat dynasty, which reigned before the Arab conquest.

Varakhsha was approximately 100 hectares in area. It was a major trade center on the road between Bukhara and Khorezm, an important western military frontier post, and cultural and political center of Bukhara oasis. Varakhsha played a big part in the fight with the Arabs; the brave local population successfully resisted them in many battles.

Varakhsha was one of the largest settlements that were founded before Bukhara was, and was not inferior to Bukhara for a long time.

According to some historical sources, Varakhsha was also named Radjfandun. There was a most beautiful palace built by Bukharkhudat in the settlement. The palace was several times destroyed and reconstructed. Archeological excavations proved that the palace was built in the 5th с and survived till the 9th c. It also became clear that the palace had three halls; now they are referred to as Eastern Hall, Red Hall, and Western Hall. The walls in Red Hall, for instance, have murals depicting fabulous creatures and hunting scenes.

Varakhsha stopped existing in the 11th с for lack of water in the local irrigation system.

During archeological excavations at the site they discovered hundreds of fragments of stucco-like carved decorations made of hard white substance obtained from burnt calcareous rock. These finds allowed full reconstruction of the carving techniques and designs used in Varakhsha. They were as diverse as geometric figures, rosettes, overlapping scales and pearl-like elements also called Sassanid pearls. These artifacts are now displayed in a number of Uzbekistan museums.