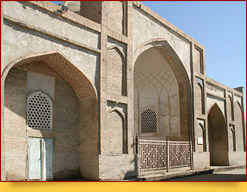 Bukhara was famous for its architectural masterpieces throughout world as long ago as the Middle Ages. One of them is the architectural complex of Hajji Zainuddin dating from the 16th c, located in a residential area in the center of Bukhara. The complex consists of a khanaka (also spelled khanqah, khaniqah, khanqa, khaneqa, khanegah or khaneqah) Sufi hospice and monastery, and a hauz pond. Hajji Zainuddin khanaka is also a mosque. In its central building with a dome they prayed, held Sufi religious ceremonies and even sang to the accompaniment of musical instruments. The combination of a khanaka and a mosque in one building was widespread in the late Middle Ages in Central Asia, which shows the merger of classical Islam and Sufism of the time.

The main hall of the building is decorated splendidly. There is an ornamental mosaic panel at the bottom and wall panels with bright murals in shades of blue predominantly. The upper part of the walls, the dome and the spandrels are also covered with beautiful murals. 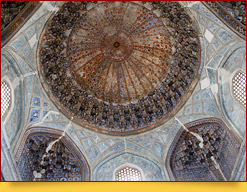 The main attraction of the khanaka and another Bukhara pearl is Hajji Zainuddin’s tomb, which stands in the western niche of the building. Its simple decoration is evidence of meeting a canonical requirement of the Koran, according to which even rulers were not to be buried in lavish mausoleums but in modest burial places in the yard. So they used to set just an arched sarcophagus or a rectangular platform covered with slabs for a prominent dead person in khanaka yards. Mausoleums were built mainly during the reign of the Timurids, while the Shaybanids forbade them. They resumed construction of mausoleums only from the late 17th - early 18th c.

Near the khanaka is the oldest Bukhara hauz pond. Its walls were once covered with marble slabs. At the stairs leading to the water there was a marble water filler in the form of an open dragon's mouth covered with ornamental patterns and inscriptions.

Hajji Zainuddin khanaka was a shelter for wandering dervishes, a Sufi gathering place, a neighborhood mosque and a pilgrimage place for the sheikh Hajji Zainuddin’s grave. The amazing atmosphere of tranquility and the history of the site still attract a lot of tourists to it. 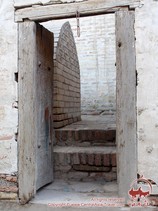 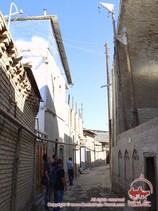 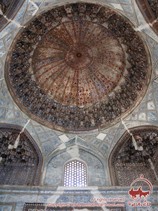