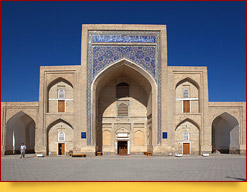 At the end of the 16th с a Khanaka mosque for wandering Sufi dervishes was built in Bukhara, near the place called Faizabad (khanaka - also spelled khanqah, khaniqah, khanqa, khaneqa, khanegah or khaneqah - is a Sufi hospice and monastery). The building was constructed by the famous Sufi Mavlono Poyanda-Muhammad Ahsi Faizobodi. It was originally named Shokhi Ahsi; later they renamed it in honor of its constructor.

The building has a mosque part and a khanaka part with three floors of cells where dervishes could take a rest and stay for a while. It is an example of the 16th с Asian architectural design, with all the elements perfectly symmetrical and harmonious. The facade of the building is a portal with stairs, flanked with vaulted loggias. The structure looks like a palace: it is elegant, smart and airy thanks to its through loggias. The height of the buildings increases from the ends of them to the portal. The luxurious décor consists if mainly white decorative patterns outlined with colored lines. The inside of the main dome is covered with strikingly beautiful chaspak stucco lace on a colored background, which makes the dome look ethereal.

Dervishes do not stay in this khanaka mosque today, but the aura of ardent religious faith still fills the building.