During many centuries Bukhara was famous not only for its architectural monuments, sacred places, but was also a center of embroidery art and, in particular, its rare kind of golden embroidery. From ancient times masters worked just right here, decorating with patters of golden threads clothes, shoes, head dresses and interior design items, which later found their owners in governors and their entourage. 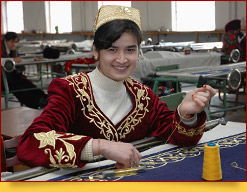 In XVIII-XIX centuries golden embroidery as court art was developed only in Bukhara and considered really gorgeous and unique.

Secrets of golden-embroidered art were passed from generation to generation and were not affordable for strangers. For a very long time only men could do this work, but later they began teaching also their wives, sisters and mothers. Now women are doing this work so skillfully, that Bukhara golden-embroidered goods became known all over the world. When the last Emir of Bukhara was dethroned and in XX century the Emirate of Bukhara was abolished, golden-embroidered art of those times also stopped existing. However, masters, who knew all the refinements of their business, went on living, and soon after that, the art of golden embroidery continued its development, having changed a bit. Its center was still Bukhara – the seamstresses, who lived here, joined into artels of craftsmen and continued making head dresses, women and men clothes and separate elements of national costume, decorating household items.

Later it was opened a golden-embroidered factory in Bukhara, which still exists. It established trade relations with various countries of the world – Russia, Kazakhstan, Lithuania, Latvia, Azerbaijan, Armenia. 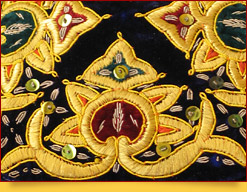 Keeping carefully the traditions of the ancestors and opening up new technologies at the same time, more than a hundred of women are working on the factory now. Most of them have been doing their favorite work for more than 30 years and are preparing a new generation of embroideresses. The products of the factory are golden-embroidered carpets, elite curtains, women and men chapans (Uzbek quilted dressing gowns), head dresses, works with state symbols, souvenirs, caskets, cases and handbags, purses, shoes. In total the factory releases more than 70 items of products. All of them are notable for Oriental luxury and outlandishness.

The basis for golden embroidery usually serves a velvet cloth of dark-blue, black, purple, cherry, lilac and brown colors. This royal cloth makes golden threads play in all their glory, strengthening the effect of hand sewing. Many works are being decorated additionally with stones, what make them look richer. There are more than 40 types of golden embroidery, but Bukhara craftsmen do not rest on their laurels and create new stitches, patterns and ornaments.

Currently the constant client for products, made by Bukhara golden-embroidered factory, is Presidential Administration of Uzbekistan, Cabinet of Ministers, Ministry of Foreign Affairs and other departments of the Republic of Uzbekistan, theaters, palaces of arts, concert halls of the capital and regions. 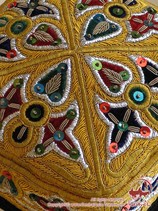 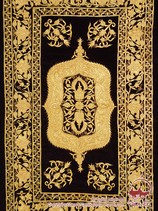