Grape growing and winemaking in Uzbekistan 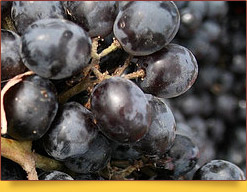 According to a legend, grape is a first plant that Noah seeded after the Flood. The other legend says that the Earth was the mother of grapes and the Sun was their father. In ancient times grapes ripened within the daylight. The earliest of them had ripened and become rosy by dawn. Having ripened by noon grapes became yellow as the sun. Those ones that had ripened by late evening became violet as night. This is the way how grapes of different colors came into being.

If you visit any of green cities of Uzbekistan you will see vines in almost every house. Grapes leaves protect from the sun rays. There is topchan (a Central Asian platform where you can sit, eat or sleep) with kurpachas (quilted blankets) and dastarkhan (a tablecloth with food on it which is spread on the floor or a small table). This Uzbek tradition helps to relax, to be close to nature and just enjoy your life.

Grapes are very wholesome as they are rich in vitamins. Red grape varieties are helpful in treating hematopoietic system diseases. Besides, grapes prevent the formation of cancer cells, improve the immune system and clear blood. Grapes help those ones who have problems with liver, gall, metabolism. They are very good for people who have heart diseases, depression and those ones who suffer from insomnia. Our organism digests grape juice very quickly as it is natural glucose. Grape vine depresses cholesterol level and in moderate doses normalizes blood pressure. Sultanas mixed with walnuts raise hemoglobin. Ampelotherapy is a special branch in medicine which was actively used by ancient Central Asian, Roman and Greek healers. 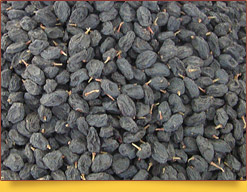 Ancient vine growers observed that dried grapes had different qualities than freshly cut ones. According to Avicenna (known as Ibn Sina) it is better to eat grapes on the second or third day after harvesting. When the bunches of grapes are cut and hung until their skins get yellowish they are nourishing and health improving when eaten.

There are black and yellowish raisins. Sultanas or golden raisins (yellow) and currants (black) are seedless, and there are also raisins with seeds, called izyumin Central Asia and Russia. Before buying raisins make sure they are soft and not overdried. If you want to add them to pastry and other dishes, you should soak them in warm water to make it swelled a little and softer.

You can buy a wide variety of grapes from numerous bazaars of Central Asia in autumn: muscadine grapes with pungent astringent flavor, gently sweet Pink Tayfi, aromatic Izabella (Vitis labrusca) grapes, quite small and very large ones, seedless and with seeds. Price for grapes depends on their sort and season. Raisins are sold all year round.

Grape growing and winemaking have been developed on the territory of Central Asia since ancient times. Sweet grapes, medicinal properties of wine and winemaking experts are mentioned in Avesta (the most ancient scriptures of Zoroastrianism), travel notes of many travelers and conquerors. Archaeological finds clay containers for wine prove these records. 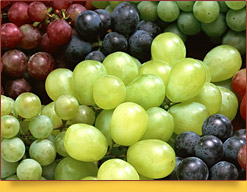 For many centuries Uzbekistan grape growing has a history of flourish, decline, destruction and revival. Despite all barriers Uzbek people could keep grape growing and winemaking secrets. Owing to the long warm period of the year over 37 grape varieties are grown in Uzbekistan. That is why Uzbekistan actively exports excellent sorts of wine, grapes, raisins and different juice. Uzbekistan won the Golden Cup at the 5th International exhibition-conference “Golden Bunch of Grapes 2013.

Soyaki, Bakhtiori, Husayne (Golden raisins or sultanas) have been cultivated in Central Asia since ancient times. Many grape varieties were brought to Uzbekistan from abroad. First special-purpose plants on making Uzbek wine were built in Tashkent and Samarkand in the second half of the 19th century. At the beginning of the 20th century Uzbek wine industry decayed because of prohibition. After the Soviet authorities came to the region, Turkestanskii Krai (Russian Turkestan) was supposed to become a powerful raw materials source and produce great revenue. So new European warm-weather grape varieties were imported there.

‘Rcasiteli’ is one of the unique grape varieties which is used to make different sorts of wine. It is used to make table wine at its early stage of ripeness. Semi-ripe ‘Rcasiteli’ grapes are good for making fortified wine. Dessert wine is made from the full ripe grapes. 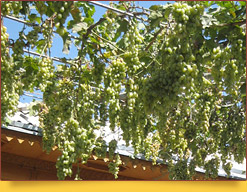 Most of the vineyards are in Samarkand, Surkhandarya, and Tashkent Provinces. Grapes are also grown in Khorezm, Fergana, Jizzakh, Bukhara and Andijan Provinces and much less in Karakalpakstan.

Bukhara is famous with ‘Rcasiteli’, ‘Bishti’, ‘Muskat Vengerskiy’ and pink Aleatico varieties. There are ‘Uzbekistan’ ‘Shirin’, ‘Gulyakandoz’, ‘Aleatico’ and ‘Hungarian Muscat’ in Samarkand Province. The most grown grape variety in Tashkent Province is ‘White Muskat’ and Kashkadarya is famous with ‘Kishmish Botir’. To keep birds from eating grapes bunches are covered with paper bags.

There are favorable economic conditions for cultivating new grape varieties in Uzbekistan. Cuttings brought from abroad are exempted from paying customs taxes till 2016. It is planned to expand the previous vineyards and grow the new ones, to introduce new technologies, to move with the times.