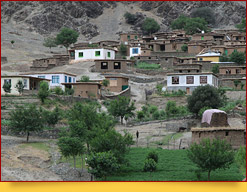 The Wakhan corridor is a territory in the north-east of Afghanistan, located in the historical and cultural region of Wakhan, Badakhshan province, which forms a narrow passage, the so-called “corridor” connecting Afghanistan and China and passing through the territory of Tajikistan. The corridor is a narrow strip of land, a harsh alpine territory with a length of about 210 kilometers and a width of 20 to 60 kilometers in the valleys of the Wakhan and Pyanj rivers. It separates Tajikistan in the north from Pakistan in the south.

According to the agreement concluded between Britain and the Russian Empire, which at the end of the 19th century put an end to the Big Game of these two powers, the Wakhan corridor was decided to be transfered to sovereign Afghanistan, which became a buffer between Russian Central Asia and British India. At the end of the 20th century, this narrow strip of land became known to the world as the Wakhan corridor.

The mountains of the Pamirs reach the highest altitude in this region, so it was not affected by military operations. After 2000, the corridor became a popular destination among extreme climbers, trekkers and backpackers from the CIS countries. Its main population is Wakhan and Pamir Kirghiz. 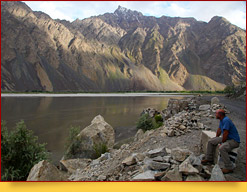 Geography
The Pamir River, whose waters flow into Zorkul Lake, forms the northern border of the corridor. The Wakhan River flows through the territory of the corridor from the east to the village of Qal`eh-ye Panjeh, then it merges  with the Pamir River and  receives a new name - Pyanj.  In the western part of the Wakhan corridor along the Pyanj River, the Tajik-Afghan border passes, to the east the corridor expands and in the northern part between the Pamir and Wakhan rivers the Nicoilas Range  (Selselehi-i Koh-i-Wakhan), which is also called the Small Pamir, rises and it    is a small, rarely visited area.

At the western “entrance” to the Wakhan corridor from Afghanistan, the main administrative center of the region, Ishkashim, is situated, and the eastern “backyard” of the corridor ends with passes leading to Xinjiang (China).

The highest ridge of the region is the Hindu Kush, along which the border with Pakistan passes.

Climate
The Wakhan corridor lies at a very high altitude and it   is 1700 km from the sea. That is why winters here are especially harsh and long. The air temperature drops significantly in late September, reaching -25 ° C and lower at night. The temperature in the region of the Kyrgyz settlements of the Pamirs drops to -35 ° C. In summer, the air in the valley warms up to + 30 ° C. By the way, considering that weather conditions in the Wakhan corridor and Wakhan area are not always favourable, period from June to September is the best time for tourists to visit this area.

Traditionally, regardless of the time of year, it is cold in the Pamirs early in the morning and at night. Tourists need to have warm clothes with them, because among other things, strong cold winds blow here.

Wakhan corridor as an end-to-end route
Despite the fact that this area is extremely difficult to cross, from ancient times the corridor was used as a trade route between Badakhshan and Yarkand. In addition, during the existence of the Great Silk Road, the Italian merchant and traveller Marco Polo, who is  famous in the whole world, walked along this road in 1271. Historical documents indicate that this region was also visited by a Jesuit priest, who went from Wakhan to China in 1602 - 1606, and by Aurel Stein, who in 1906 after exploring the region in his "chronicles" noted that every year hundreds of horses loaded with various goods moved along the corridor towards China.

Wakhan
Wakhan is a district which is part of the Mountain Badakhshan region, located along the headwaters of the Pyanj and Wakhan rivers. Aryan people, inhabiting Wakhan, absorbed a bizarre and vibrant mixture of different religions, traditions and systems into their culture, while maintaining a sense of unity and harmony with the majestic mountains surrounding them. Many historical personalities who are  famous throughout the civilized world directly participated In the history of Wakhan: Alexander the Great with his army, preaching Greek Buddhism; Tibetan Buddhists who founded huge monasteries here; Arabs who were brought Islam; the Mongol conquerors, who helped the Sunnis and Ismailis in the struggle against each other. All of them left a memory of themselves in this land, lost among the highest snowy mountains. 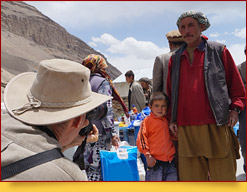 Population
The north of Badakhshan province is inhabited mainly by Pamir peoples. In the uluses of Ishkashim and Wakhan, the main population is Wakhans. Their difference from the traditional image of the Afghan is very large - there is a much more free society, women do not wear a burqa, the traditions of hospitality are still alive, and relations between people are sincere and direct. And the most important thing that determines these differences is religion.

Unlike the main religion of Afghanistan - Sunni Islam, the residents of the Wakhan corridor profess the traditional religion of the Pamirs - Ismailism. Although officially Ismallism is a trend of Islam, the differences are very great. In the Pamir villages there are no mosques, there are no obligatory prayers and other religious attributes either. The  main thing is internal communication with God.  The hereditary descendant of the prophet Muhammad, who, according to the Ismailis, is Aga Khan, acts as the imam, the governor of Allah on earth They worship Aga Khan almost at the level of a deity in the flesh, since their god really works wonders for his subjects - he opens schools in highland villages, builds roads and hospitals. The main idea of the Aga Khan’s activity is that poverty is the cause of religious extremism and instability. He believes that by eradicating poverty, a prosperous society can be created. Using the example of the Wakhan corridor, the world has become convinced that this idea is really being successfully implemented. 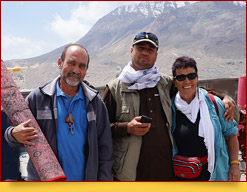 Tourism
Often before the eyes of people  who are told about Afghanistan,  the images of the Taliban, terrorists, America and everything bad that is associated with the endless Afghan war  appear. Yes, there are things like this in Afghanistan. But you do not find them here in the area of the Wakhan corridor. The inhabitants of mountain  Badakhshan have never seen a war, nor experienced fear in this regard. Because it has never been here. It is possible that the natural conditions of the region and its geographical location affected this. So visiting the Wakhan corridor by tourists is quite feasible and absolutely safe. And due to its remoteness from the civilized world and the insane natural beauty, this place especially attracts foreigners who want to enjoy  the bewitching nature untouched by human destroying hand
Now the Wakhan corridor is becoming especially popular and attractive among lovers of mountaineering, trekking and other types of outdoor activities.