Useful Information on Traveling in Azerbaijan

Azerbaijan is often called the ‘country of fires’: the area is rich in oil and gas deposits lying close to the surface and often forming gigantic torches when breaking through it. The natural landscapes of this country are highly contrasting, while its climate makes it possible to experience all four seasons at the same time! Intricate architectural forms, grandiose sky-scrapers and original modern urban buildings performed in the European style go hand in hand with various old constructions and ancient palaces and fortresses. 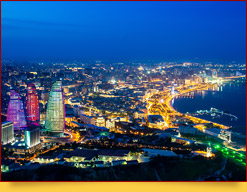 The first humans inhabited the territory of present-day Azerbaijan over 1.5 million years ago. To this day we can find traces of ancient people: the Zoroastrian Ateshgah temple, the city of Shamakhi, Chukhur Gabala, Sheki and, certainly, the Gobustan archaeological reserve, famous for its numerous rock paintings, whose age ranges between 4 and 5 thousand years!

You can see an absolutely different life in Baku, the beautiful capital of Azerbaijan, the largest city in the Caucasus and the biggest Caspian port. The city abounds in attractions and historical places: the Baku Boulevard, which one cannot pass without admiration; the National Flag Square with the world’s second tallest flagpole; the Old City (Icheri Shakher) with old constructions; the Flame Towers - the tallest buildings in Azerbaijan resembling in appearance three tongues of flame; the Heydar Aliyev Centre, a most up-to-date centre for culture, whose design was recognized as the world’s best in 2014; and many others.

The amiable and friendly Azerbaijani people are hospitable, open and always willing to help, while the indescribably delicious Azerbaijani cuisine is very good for the health at that: the Caucasians are well-known to rank among the planet’s longest living peoples.

Welcome to the ‘fiery’ and amazingly contrasting Azerbaijan!

Location. Azerbaijan is situated in the southeastern part of the Transcaucasian region. It borders on Russia, Georgia, Iran, Armenia and Turkey. From the east the country is washed by the Caspian Sea. Almost half of Azerbaijan’s territory features mountainous terrain. Spain, Greece, Turkey and Korea lie in the same parallel as Azerbaijan. 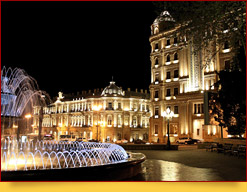 Area: 86.6 thousand sq km. Azerbaijan stretches 400 km from north to south and 500 km from east to west. Several small islands in the Caspian Sea, such as those from the Baku and Absheron archipelagos, also form a part of Azerbaijan’s territory.

Capital: The city of Baku with a population of over 2.1 million people.

Monetary unit. The basic monetary unit of Azerbaijan is manat (AZN). The local currency can be bought at banks, hotels and numerous currency exchange offices. Exchange offices often operate for 24 hours (in Baku, large cities and at airports). If you exchange a sum of over $500, you are to show your identity card.

Religions. Azerbaijan is a secular state. Around 99.2% people profess Islam.

Electric power. Standards B and F sockets with a voltage of 220 V and a frequency of 50 Hz are used throughout Azerbaijan.

The best time to visit Azerbaijan is April to June and September to October. The territory of Azerbaijan features 9 climatic zones of the world’s total of 11 zones - from the subtropics to the Alpine meadows.

How to Dress in Azerbaijan. 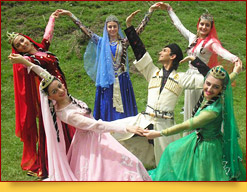 There are no strict rules as to the clothes to be worn in Azerbaijan, particularly in the cities. However, the clothes should not be too provocative: women should refrain from wearing tight fitting dresses, short skirts and low necks, while men should not use shorts and sleeveless shirts.

Local men prefer a business style, while women wear elegant clothes and high-heeled shoes and are very attentive to their makeup.

Entering the local people’s houses you should take off your shoes.

Azerbaijan’s traditional cuisine is highly diverse, featuring a great number of meat, fish, vegetable, dairy and baked delicacies made perfect with the help of aromatic herbs and spices. 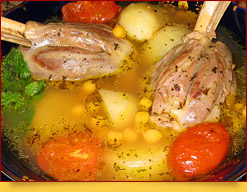 Bread plays a key role in the Azerbaijani kitchen and is deeply revered by the people. Bread is baked on a slightly bulging iron sheet saj in a tandir (traditional Central Asian clay oven; also spelled tandyr, tandoor), which was originally used to make a churek and lavash. Gutab, thin pasties from unflavoured dough in the form of a crescent filled with meat, herbs, curds, pumpkin and so on, are popular in spring and autumn.

Meat dishes in Azerbaijan are particularly numerous and diverse. Among the most popular ones are basturma (dried beef fillets), shashlik shish kebab (also shashlyk) and thick mutton soups piti and bozbash. Other common food includes kelem dolmasy - minced mutton mixed with rice and spices and wrapped in cabbage leaves, yarpag dolmasy - mutton, aubergines and tomatoes wrapped in grape leaves, and lula kebab - minced mutton seasoned with onion and sweet spices. A dish made from pieces of mutton mixed with various vegetables is also called saj.

Rice food is also held in respect in Azerbaijan. The most popular food of this type is pilaf (also spelled pilaff, plov, pilau, pilav, polow, pulaw, pulao), which has 50 varieties in Azerbaijan. Chygartma is the most typical dish from poultry, which is also the Azerbaijani’s favourite food of this kind. Dovga made of sour milk and herbs is usually served in the end of a dinner.

The Azerbaijani cuisine is famous for its sweets, such as nogul, nabat, shekerbura, gata, pakhlava, kozinaki, halva, Turkish delight, sugared figs and sherbet (water sweetened with honey). Tea occupies an important position in the Azerbaijani’s everyday meals, which are preceded and accompanied by tea drinking. First comes tea, and then the guests are offered second courses. Tea is served together with sweets, such as Baku pakhlava and jams from figs and Cornelian, sweet and Rainier cherries, walnut and water melon.

Cost of Food in Azerbaijan.

The tour program includes accommodation in hotels and breakfasts. If you like, we can reserve tables at restaurants. Below are approximate meals prices:

Mind that even if a tourist has the visa for Azerbaijan they may be denied permission to enter the country, if they have a record in their passport that they have visited Nagorno-Karabakh, an illegally occupied territory of Azerbaijan.

During the whole period of your stay in Azerbaijan you must always have with you an identity card or its copy with the visa permitting to enter the country (for countries whose citizens are required to have a visa for Azerbaijan).

All foreigners who stay in Azerbaijan for over 10 days must register at the State Migration Service of Azerbaijan within 9 days after their arrival. In order to do it a tourist must deliver a completed registration form, a copy of the passport and a copy of the visa (for countries whose citizens are required to have a visa for Azerbaijan) to the State Migration Service, personally or via e-mail. Hotels assist their guests in going through this procedure, but tourists staying at private homes or unlicensed hotels must register for themselves. The registration is free, but the person that does not obtain it may be fined 300-400 manat.

It is recommended that you fill the customs declaration, where you specify the exact sum of cash money you bring to the country. The declaration must be signed and stamped by a customs official and must be preserved until the moment you depart Azerbaijan.

People are allowed to bring up to 1.5 litres of strong alcoholic drinks and up to 2 litres of wine (for persons over 16 years of age) to Azerbaijan. Those who plan to bring antiques or carpets from Azerbaijan must obtain a special permission from official bodies. You are allowed to take up to 125 g of caviar, 30 packs of cigarettes and the quantity of medicines necessary for personal use. 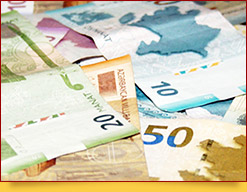 The basic monetary unit of Azerbaijan is manat (AZN). The face values of the banknotes are 1, 5, 10, 20, 50 and 100 manat, while those of the coins are 1, 3, 5, 10, 20 and 50 gopik. The local currency can be bought at banks, hotels and numerous currency exchange offices. Exchange offices often operate for 24 hours (in Baku, large cities and at airports). If you exchange a sum of over $500, you are to show your identity card. Automated teller machines (ATM, cash dispensers) can be found only in large cities. In the centre of Baku there are plenty of them, with at least one ATM in every regional centre, even the smallest one.

The currency exchange rate at the National Bank may differ from those at private banks. In Baku banks are open from 9:00-9:30 am to 5:00 pm. Banks do not operate on official holidays and on days-off; in this case you can only exchange money at the Respublika Bank, which is open after normal business hours.

Master Card and Visa cards can be used at boutiques, expensive restaurants and large hotels. Credit cards may be rejected by some food shops, cafes, hotels or boarding houses. You can hardly use credit cards outside cities.

Photography is allowed at any monument, except for the underground, airports, bus stations, petroleum refineries, factories and other guarded objects, where photographing is prohibited. Taking pictures may require extra payment.

Many of the large restaurants of Baku indicate in their menus the sum of tips, which is usually from 5% to 10%. If a restaurant does not provide it, you may add 10% to the bill sum (if you do it in the beginning you will be served more quickly). Many of the cafes leave it up to their clients to decide whether or not they should tip. If you really liked the service, it would be good if you thank the waiter by tipping them 10% of the sum indicated in the bill.

A porter at the airport or hotel may be tipped 5 to 10 manat, depending on the size of your luggage. Taxi drivers are not tipped, usually; you should negotiate the fare in advance. You should keep in mind that taxi drivers do not accept foreign money.

Remember to bargain, particularly at markets and in private shops - you can easily reduce the price 2 times! 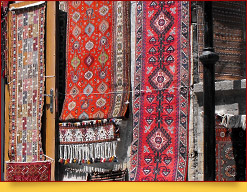 Azerbaijan is famous for its unique traditional crafts.

Carpets, original carpet bags and special mats for teapots and cups are considered to be Azerbaijan’s main souvenirs. Antique carpets of high value may not be taken out of the country. However, you may purchase a new carpet with an unthinkably beautiful decorative pattern. You can consult your guide for details before you buy it.

Pear-shaped glasses armud (made of crystal glass and painted with coloured ornamental patterns) are also perfect souvenirs. In these glasses tea remains hot for a long time. Rainier cherry jam may also be a wonderful present.

You can bring an original tablecloth with a buta - the traditional Azerbaijani pattern, and a couple of copper kitchen utensils. The tablecloths are made of thick fabric and decorated with gold embroidery. They are beautiful, practical and washable. Copper utensils include wine jugs, chased plates, vases and samovars, all of which can be used both as elements of décor and as practical things.

Photos of the tour: