Places of interest in Nur-Sultan (Astana) 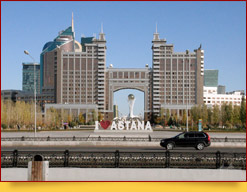 Nur-Sultan (formerly Astana, Akmola) is the capital of modern Kazakhstan since 1997. The decision to move the capital from Almaty (Alma-Ata) to Akmola was made by the First President of Kazakhstan, Nursultan Nazarbayev, because the former capital could not cope with the growth: due to the proximity of the mountains, it was difficult to build the city in breadth, the population grew rapidly and the environment quickly deteriorated.

In the shortest possible time, Akmola, located in the centre of Kazakhstan, turned into a modern metropolis. In such a way Astana, which means “capital” in Kazakh, was born. For 20 years, the city with a population of just over 280 thousand people has become a million-people city. In honour of the final decision of moving, Kazakhstan celebrates the Day of Capital on the 6th of July.

In March 2019, after Nursultan Nazarbayev’s resignation, Astana was renamed Nur-Sultan.

Today, Nur-Sultan is one of the fastest growing cities in the world. The concept of building the metropolis is based on the idea of an Eurasian style, a symbiosis of East and West. The master plan was developed under the leadership of the Japanese architect Kise Kurokawa. 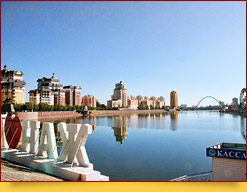 In 1999, UNESCO declared the capital of Kazakhstan a “city of peace” for promoting ideas of religious tolerance.

Nur-Sultan has the status of a special economic zone. In 2018, the Astana International Financial Centre was opened here, working on the principles of the British law.

Nur-Sultan is divided into two parts by the Ishim river (Yesil) that flows through the city. In winter, it is cold with its Siberian extreme temperatures and in summer weather  is characterized by sweltering heat. Strong winds blow year round. To help make the climate milder, a "green" belt has been built that should reach 100 thousand hectares of vegetation spaces in the city by 2020.

Dozens of construction sites are implemented annually in Nur-Sultan. Futuristic architecture, in which Asian motifs and hi-tech are wonderfully intertwined, is rich in references to Paris, St. Petersburg, Moscow, Abu Dhabi, Sydney and Athens. 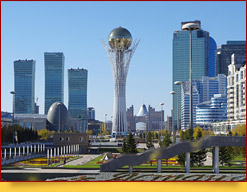 It is a city of business, science, education, sports and culture. The largest Kazakh universities work in Nur-Sultan. Concerts of world celebrities, international contests and sport competitions are held here as well. In 2011, Nur-Sultan (Astana) hosted the 7th Asian Winter Games, and in 2017, the international specialized exhibition EXPO 2017 took place here.

A bit of history

In ancient times, here there was a transhipment point on the Silk Road trade routes. There is evidence that people lived here since the Bronze Age. Artifacts of the early Iron Age and the middle Ages have been found. The ancient settlement of Bozok, located five kilometres from the centre of Nur-Sultan (Astana), is considered the ancestor of the Kazakh capital.

The name “Akmola” is translated from Kazakh as “White Shrine” or “White Grave”. It is associated with the burial of the revered leader of the nomads Niyaz-bi, located on top of a white limestone hill 20 km far from the city. According to another version, the city “Ak Mol” - “white abundance” was called so thanks to the fairs where dairy products were the main goods for sale.

In the 19th century, Akmolinsk appeared on the map which was a Cossack fort with a fortress, built to protect russian lands from raids by khanate forces. The city gradually grew around the fortified walls.

In the 1960s, Tselinograd became a centre for the development of the fertile lands of Kazakhstan and Southern Siberia. In 1992, the name Akmola had been returned to the city, under which it existed until 1997, when it was renamed Astana after capital moving.

Today, Nur-Sultan is an example of modern architecture, and its attractions emphasize the concept of an ultramodern city at the crossroads of cultures.

What to see in Nur-Sultan, attractions of Nur-Sultan: 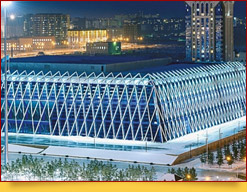 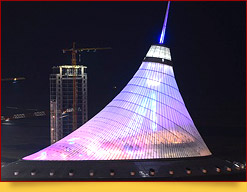 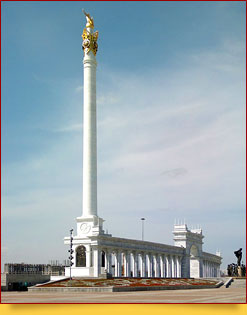 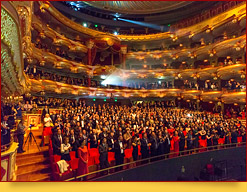